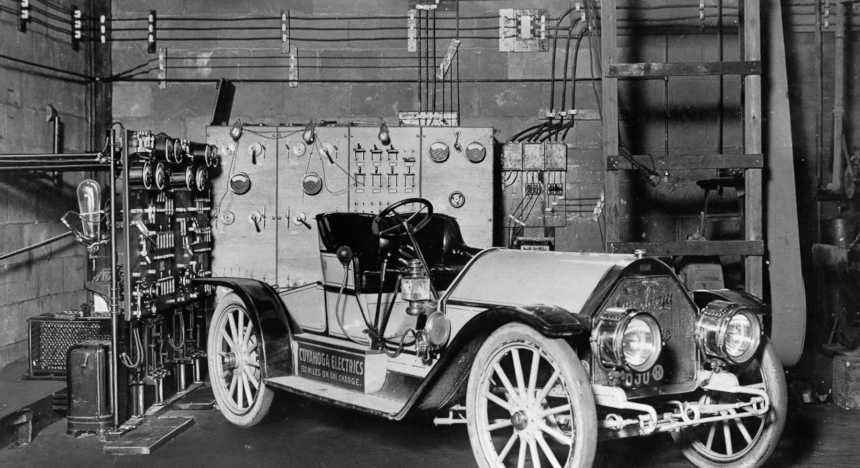 We all know about charging stations, but few know their historical origin. We reveal all, so come with us on a short journey through the history of the charging station.

Charging stations were invented in the 19th century

Did you know that the development of the ev charging station didn’t start with Tesla, but in the mid-19th century? Electric cars were in demand back then – they were even more popular than petrol cars. But the charging station’s predecessor wasn’t a station, it was a room. Massive battery blocks were stacked in the battery room. These blocks replaced depleted disposable batteries. Only once French physicist Gaston Planté invented the rechargeable lead-acid battery in 1859 could the same batteries be reused. Unlike today, very few households had electricity back then. So there were lots of public spaces, such as halls, dedicated to recharging batteries. The electric cars would be driven in and connected via a hefty cable to one of the recharging modules, which were lined up along a wall.

The Electrant milestone and combustion-engine breakthrough

In 1899, General Electric launched the Electrant charging station. It was installed in large US cities and looked like a telephone pillar. However, the success of the electric car was suddenly thwarted (for the time being) by a rather unremarkable invention: the starter motor. Drivers of petrol cars now no longer needed to go through the inconvenience and major effort of cranking the engine manually – they could simply switch it on. Cheap fuel prices and the better range gave the combustion engine its big break.

Until the 1950s, the charging technology for electric cars remained largely unchanged. It was only through advances in space exploration that batteries and charging options improved. The topic gained impetus in 1997 with the Toyota Prius, which combined a petrol engine with an electric drive system and was the first car in the world to be mass produced with a hybrid drive.

In 2006, Tesla accelerated development when it launched its all-electric Roadster. Tesla promised a range of up to 400 km (just under 250 miles) back then, a quantum leap that sparked demand for private charging stations at home.

Electric cars are now making a comeback, so demand for public and private charging stations is high. Webasto’s latest home charging solution is the second-generation Webasto Pure, which makes charging at home convenient and easy. The central LED display, for example, depicts the charging process in a flowing, gently pulsing colour transition. Another new feature is the integrated DC residual current protection.

There are also more amp settings available when setting up a Webasto home charger, so the installer can better adjust the charging current to the local infrastructure. The Webasto Pure charging station also impresses users with its ease of use (Plug & Play) and its practical cable suspension for tidy storage of the connector and charging cable. Webasto is so convinced of the quality of the new generation of its EV chargers that, alongside the 2-year statutory warranty, it provides a further 3-year guarantee. We’re sure the electric car drivers of the 19th century would have loved a solution like this.

Another chapter was recently added to the charging station’s history book: Tesla has developed public Supercharger stations that can add up to 120 km (75 miles) of charge to a Tesla Model 3 in five minutes. By contrast, a capacity of up to 22 kW is enough for a home charging station, as the electric car is parked overnight, leaving plenty of time for it to be fully charged by morning.